Sometimes obstacles can have unexpected outcomes.

I came on retreat with a persistent dry, hacking cough. My plea to preserve other retreatants’ sanity by being assigned a room where I wouldn’t disturb them was answered by being given the “Woodpecker” room. Blissful. A room at the front of the house, away from everyone else.

From the first morning, a wicker chair next to a table on the front porch became my “good morning, world” spot. Be it foreground, middle ground, or distance there was something engaging to see.

On the first morning as I was sitting and settling in for the day, a red squirrel and a chipmunk were unexpected companions. They disappeared quickly. I thought about the pack of trail mix I had brought with me, just in case I needed it, and decided the squirrel’s and chipmunk’s needs were greater than mine.

On the second morning, I scattered some of the delectable mix, sunflower seeds, cashews, peanuts, raisins, dried cranberries, on the wall in front of me and waited. Nothing.

On the third morning, ditto. This time a black, elegantly shorn Portuguese water dog came ambling out of the wood in front of me. It stopped, looked at me, I think somewhat disdainfully, and then wandered off.

On the fourth day, I gave up on the trail mix. But the chipmunk appeared.

On the fifth day, nothing.

On the sixth day the squirrel turned up!

On the seventh day the squirrel decided the shelf on the table next to me was worth exploring as were the chair legs under me. But then it realized I wasn’t part of the furniture and skittered off down the ramp leaving behind a trail of foot and tail prints on the dewy surface as testimony to its presence.

I went inside and got the trail mix. Just sunflower seeds and a couple of raisins left, the stuff at the bottom of the pouch. I sat down and waited. The chipmunk appeared. It turned out it wasn’t alone: there was a battle royal being fought in the flower bed beneath me. The winner crawled out onto the porch to my right, checked out the floor and discovered the seeds, and the raisins, chewed frenetically and disappeared, appearing again shortly after, in a different place. I wondered briefly if chipmunks were troubled by plaque from eating sweet things.

My learning from this? Aside from the obvious, that God won’t be tamed, nor is to be summoned up at will like the genie in Aladdin’s lamp: get up half an hour earlier. And instead of sitting slumped over the kitchen counter trying to focus on Matt Galloway on Metro Toronto (the morning radio show on CBC for my non-Toronto friends) as I swallow my morning cuppa, take it outside. Find a place to sit, preferably the same place each morning and savour your mug of tea, Lapsang Souchong with plenty of milk for me, or coffee if that’s what you prefer, and simply be. Savour the quiet. Feel how gently the world is being opened up to you.

Would you like to join me? Each in our own place, of course. 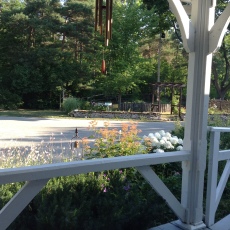 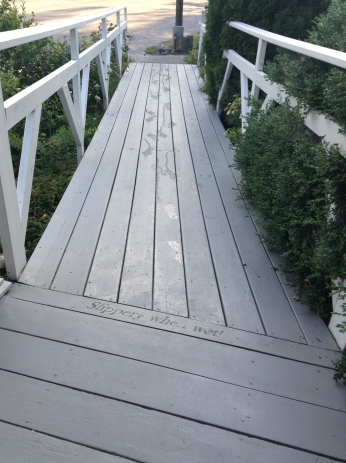 All materials published on this site are copyright.  Ilze Kuplens-Ewart, 2016 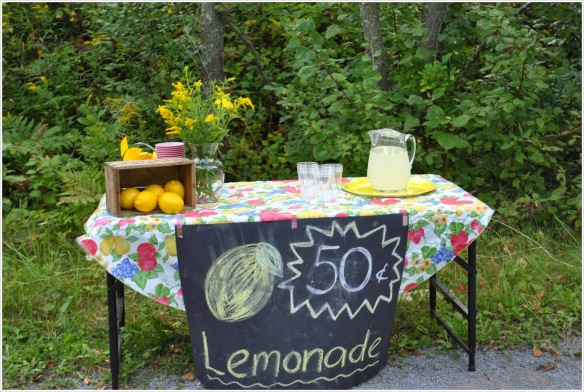 In a week marked by continued unrest throughout the world, the bewilderment in behavioral therapist Charles Kinsey’s voice as he related the police officer’s response to Kinsey’s asking him why he had shot him, “I don’t know” echoes what many feel at this time.
Brexit, Trump, shootings in the US, attacks in Europe perpetrated by disaffected second generation immigrants, the failed coup in Turkey; what is going on? There seems to be a connection, as Mark MacKinnon suggests writing in the Globe and Mail on July 23: a groundswell of deep disatisfaction with the status quo among those who have found themselves sidelined. [1]
The uncertainty this is causing seems to be having a significant impact on our youth. Rather than looking forward to graduating high school and striking out into the world with enthusiasm, students are experiencing heightened anxiety and depression. For many young people, the future represents pressure, not possibilities.
How do we respond as people of faith? What constructive message can we share with our youth, with those for whom the present, let alone the future, seems bleak?

What might we glean from the passage from Genesis 18:20-32 about Abraham’s response part of a challenging situation?

It is worthwhile remembering that Abraham is the first patriarch of three of the world’s religions, an example of faithful leadership to Jews, Christians, and Moslems alike. The teachings contained in this narrative consequently carry great weight to their adherents. They have normative value.
In the verses before this passage God is shown as debating whether or not to tell Abraham of his plans for Sodom. God decides to do so, because “I have chosen him [Abraham] that he may charge his children and his household after him to keep the way of the Lord by doing righteousness and justice.” So, what follows is less a test of God, more of Abraham’s ability to act righteously and with justice. Has Abraham taken on board what it means to be in relationship with God, whose desire it is to bless and heal the world? In short, what kind of leader is Abraham? This encounter will be a key indicator.
God’s announcement of the decision to annihilate Sodom certainly opens the door to endless options to respond. Yet Abraham is not in the least interested in the reasons, neither does blaming or judging the inhabitants because of their deeds get a mention. And certainly, the last thing on Abraham’s mind is to applaud God for the rightness of their destruction or offer to rally his tribe to lend God a hand.
Instead Abraham responds to what he sees as the injustice of what God is proposing. Rather than bury his head in the sand and pretend he doesn’t know, or be overwhelmed into inactivity, Abraham stands his ground, literally. Indeed, he comes right up to God almost jabbing with his finger. “What do you mean, you’re going to destroy the entire city! What about the innocent ones?” and pleads with God repeatedly to show justice and mercy. And God agrees. Abraham has passed the test. He has shown courage, compassion, and tenacity despite being seemingly confronted by the greatest opponent imaginable.

We are all leaders. This isn’t just a meaningless mantra our children are sent home from school with to energize them, it applies equally to everyone. The choice, whether to blindly follow demagoguery, to remain in that most painful of places in the long-term, “sitting on the fence”, or to take action to support justice and righteousness is entirely ours. Taking action simply requires a little imagination, and using the talents and opportunities available to us. Each voice counts. Funding Barack Obama’s first presidential campaign seemed to be a lost cause by comparison to the might of wealthy Republican donors, but it was turned around by social media, by $5 and $10 donations from ordinary folk, and by people coming out to vote. Rather than joining in with the complaints at the water cooler, we can exercise our democratic mandate and write to our political representatives; they will take note. We can join with our faith communities and take action to support those who are sidelined. We can listen to our young people, and, instead of perpetuating the myth of “you can achieve whatever you want, all you need is to want it”, hear their concerns and reassure them that we are there to support them through difficult times.

We can. We can let the voice of Abraham, the actions of Jesus resonate through us. Chaos is not the only reality.